END_OF_DOCUMENT_TOKEN_TO_BE_REPLACED

New Belgium Brewing, not a name that requires much introduction for their wide variety of beer and of course the traveling Tour de Fat festival. This summer, on the evening before the bicycle parade and TdF festival, Radio Boise (our non-profit; community radio) hosted their annual Pre-Fat street party to raise money to support the station. This block party on 8th street between Idaho & Bannock from 4pm-11pm featured a variety of live music and Radio Boise DJ’s, street vendors, food, and of course beer.

I wanted to send a shout out New Belgium for donating all the beer, which was sold throughout the evening to raise funds for KRBX. As a volunteer, selling beer for four hours or so, I have to think that we must have sold (at least) a few thousand cans. At $5/each that adds up to a nice contribution to a local non-profit.

The evening went off without a hitch, as far as I could tell. The crowd was in good spirits, thirsty and the music was varied enough to keep the groove going. It’s always nice to see craft beer giving back and I see it it regularly on the local level, but to see large regional brewers step up to the plate as well is refreshing. Craft beer, from brewer to consumer continues to have a healthy sense of community that macro brew will never have; not to mention flavor and good beer.

Here is to the continuation of great beer, good people and incredible events. 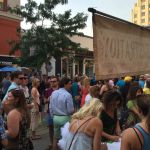 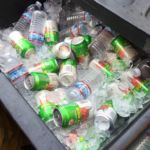 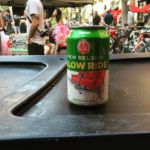 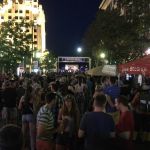 It’s Sunday morning and I’m feeling fine, surprising as that may be.  It’s time to get up, get ready and jump in the car to check out as many breweries as possible before it’s time to jump on a plane and head back to Boise! 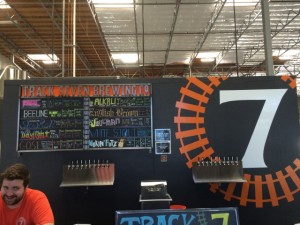 This place is HUGE, you could probably park a 737 in here.

This is another brewery that has seen explosive growth recently, having just relocated to a new facility that looks to rival Knee Deep in sheer size.  It is enormous, and I’m talking on a scale of 1.5 to 2 aircraft hangers humongous.  On our way into the brewery, being that this is California, we made the required stop at In-N-Out burger to grab some lunch before rolling into Track 7 and starting the day. At the time that I was here, they were still waiting for quite a bit of brewing equipment so the space seemed especially vast, and empty.  The people however, both staff and patrons, were chatty and very friendly.  After spending 15 minutes at the bar tasting all of their offerings and chatting about beer in California & Idaho I settled on their Panic IPA which paired exceptionally well with an “animal style” In-N-Out burger & fries.  After lunch and some quiet reflection time I was presented with Track7’s Left Eye Right Eye Double IPA which is also outstanding. Hoping that I’d make it home with at least a few souvenirs I grabbed a Track 7 tulip glass as we headed out to make our way to over to Yolo Brewing.  Hopefully the fine folks at Track7 will start getting some of their beers up North and into Idaho in the near future.

END_OF_DOCUMENT_TOKEN_TO_BE_REPLACED

After so much pain on the train it was time to get serious and start checking out some of what Northern California has to offer when it comes to our most favorite hopped beverages! 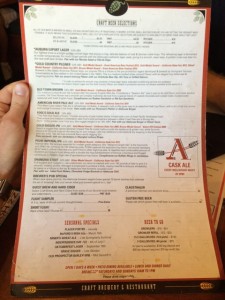 Bright and early Saturday morning in Sacramento.  The sun’s out and the first thing we need is coffee. Lots and lots of coffee.  The plan is to meet up with some friends in Auburn (40 min outside of Sacramento) for lunch then make our way to Knee Deep Brewing before heading back to Sacramento & Device Brewing.  The Auburn Ale House, which is a restaurant with it’s own brewery attached (similar to The Ram, or Grind Modern Burger) put out quite a spread for us.  Being that this was California, IPA’s are quite prominent.  The black and blue burger paired with the Gold Digger IPA set the stages for a great day of tasting with a combination of loads of protein and bread to help soak up some of the impending flood of alcohol.  If this had been a leisurely trip with no agent and no burning desire to hit as many incredible breweries as possible it wouldn’t be any trouble spending a half day here or more.  In fact, they were setting up for a street party which was closing down the entire block as we were heading out.  Clearly these guys know how to have a good time!

END_OF_DOCUMENT_TOKEN_TO_BE_REPLACED

It’s hard to believe that it’s already come and gone, but the trip to California this year was everything that I could have hoped that it would be.  In short it was an adventure in which I made a host of new friends, got to see and experience a ridiculous amount of great beers and made my Hollywood debut all in one trip.

Leaving… on a jet plane! 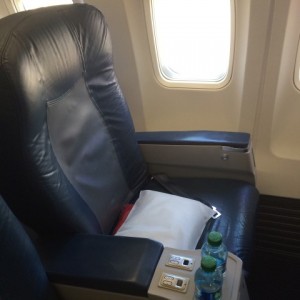 Everything is better in first class.

Kicking off the trip was un-eventful, grabbed a morning flight out of Boise to Seattle for a brief layover before making the second jaunt on to L.A.  It was boarding the second flight out of Seattle that I knew, beyond any doubt, that this was going to be an incredible trip.  I lucked out and took advantage of a Delta promotion to upgrade my 3 hour flight from Seattle to First Class and if you ever have the opportunity I highly recommend it (on any kind of extended flight at least).  Aside from far superior seating, you’re actually treated like a valued customer with extremely attendant flight service.  Before I was even settled in my seat, a flight attendant was ready to take my drink order and I started sipping on whisky while the rest of the plane was boarding.  Hot towel, yes thank you I would like to freshen up.  I mean come on, this is over the top in an all sorts of wonderful way.  Ohh yes, I would like another whiskey while the rest of the plane is boarding, why thank you very much!