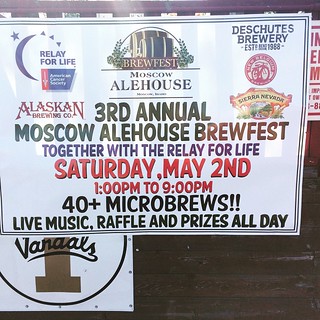 Take a moment and ponder your perfect day.  Are you’re thinking about a sunny summer afternoon, 40+ regional brews on tap, live music and a bunch of beer lovers on hand? I know I am. If you’re up for a drive up North you should consider checking out the Moscow Alehouse Brewfest. If you’re not already familiar with Moscow (home of the University of Idaho), it’s a quaint college town about 5 hours North of Boise (just a few miles East of the Washington border & Washington State University)  nestled in the rolling hills of the Palouse. Now, when I first rolled into town a few days before, my first stop was of course, Moscow Brewing. When you’re in the area I can’t recommend highly enough that you stop by, have a few pints and say hello.  This nano brewery is a hotspot for beer drinkers to congregate, drink and talk beer.  They start trickling in right at open (4pm) and by 5:00 or 5:30 you may find it hard to score a seat.

This year’s Moscow Beerfest event took pace on May 2nd and the conditions were perfect. Lots of sun, a bit of a breeze, cold beer and loads of happy, chatty beer lovers.

Originally, the admission price included 5 tokens and a souvenir pint glass, I want to say it was $15, but my notes and memory are a little sketchy. Sadly, when I arrived about 4pm, 3 hours after the event got underway, they had long since run out of glassware. Despite my disappointment, I have to give props to Moscow Alehouse for dropping the admission by $5 for those of us that missed out. Plastic cup in hand and 5 tokens to start (included with admission) and it was time to mix, mingle, and drink beer. While each token was good for a 4oz pour, additional tokens were only $1 which struck me as incredibly reasonable to the point of almost being an outright steal!  On top of all the beer, they also had several tables worth of swag with everything from brewery pint glasses and cozies to sweat shirts and even BBQ grills that they were giving away throughout the day.  In between giveaway’s there was a variety of live music on the main stage. 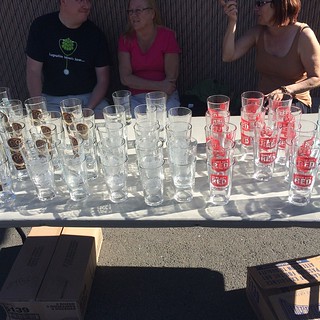 As I was making my rounds to explore all of the offerings at Brewfest, I bumped into a gentleman who is preparing to open another brewery in Moscow.  A few minutes later at another table, I was introduced to someone in the early stages of launching a distillery as well. While not on the same scale as Boise, Moscow’s craft beer (and spirits) offerings are growing at an impressive rate. And that doesn’t take into account the brewing scene in Pullman, Washington just a few miles down the road.

I continue to be impressed at every beer focused event that I’ve been able to attend. The people are cool, the beer is cold (and plentiful), and it’s incredibly easy to meet new people and strike up an enjoyable conversation around a common love of beer. Moscow Alehouse definitely put together a great event and I hope to be able to join them next year as well.

*edit* This is what happens when you type up most of a post and think you posted it, but instead save it as a draft… /facepalm  Better late than never though.