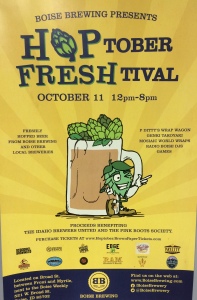 What better way to spend 8 hours on a Saturday than at a street party surrounded by a few thousand beer lovers, 13 local breweries, food trucks ( P Ditty’s Wrap Wagon, Genki Takoyaki, Mosaic World Wraps), and music (Radio Boise DJ’s) on a mostly sunny afternoon. That was exactly the scenario that awaited the (hopefully first annual) Hoptober Freshtival attendees on October 11th at Boise Brewing in downtown Boise on Broad street.Admission to this all day beerbration (pretty sure I just made that word up) was a mere $20 in advance ($25 at the gate). At the gate each guest was issued a 4oz mini-mug. This mug, which was really more of a golden ticket, could be taken to any of the brewery fill stations on-site for a fill of magical elixir and the choices were fantastic. With 13 different breweries on hand, many having 2 beers to choose from, choices were never in short supply. On hand were beers from (in no particular order) 10 Barrel Brewing, Sockeye, Crooked Fence, Sawtooth, Woodland Empire, RAM, EDGE, Highlands Hollow, Salmon River, Portneuf Valley Brewing, Payette, Grand Teton, and of course Boise Brewing. Stouts, ales, saisons, and IPA’s were all easy to find, just to name a few.

While it was almost impossible to find a beer station that didn’t have a line, things were orderly and moved along at a brisk pace. Patrons waiting in line were cheerful, friendly and frequently chatting about what they had already tried, were hoping to try, or looking for advice of the like.Unfortunately, I missed out on the first few hours due to other commitments, but it was definitely still going strong when I rolled in at five o’clock. Having been on hand for the Boise Brewing grand opening earlier this summer (another street party), I knew that this would be a must attend event. To put the crowd and their beer drinking prowess into perspective, in total 35 kegs were consumed during the event and from what I could see I think the first breweries didn’t start to run dry until after 6 which I couldn’t help but find impressive. Having been behind the scenes, I know that more than one brewery on hand had more beer brought in to keep their taps flowing. As the evening drew to a close, around 7:45pm what seemed like a micro-burst brought in a bunch of wind and rain which wrecked a little bit of havoc but seemed a fitting way to close out a wonderful fall evening in downtown Boise.With the massive influx of new community micro-breweries that have started to spring up in the greater Boise area, it is fantastic to see events like this come about as a beer lover.

My only regret is that they don’t come along more often. Seriously, talk about beer paradise! Thirteen breweries that were all you can drink for 8 hours for a mere $20? Find me a better event anywhere if you can, because that’s where I want to be. As the North West continues to grow into a bit of a beer mecca it’s very welcome that this culture has expanded into Idaho after having such a successful incubation in our neighboring states of Oregon and Washington.Proceeds of this event benefitted the Idaho Brewers United and the Pink Boots Society. Boise Brewing has a great selection of photos from throughout the event that are worth checking out as well. 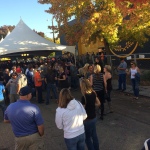 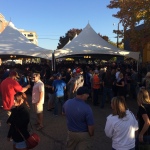 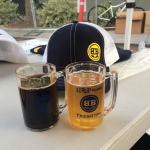 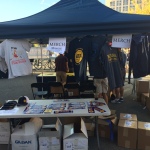